‘Child trafficking with help of State’

Victim of illegal adoption affair wants to go to court

‘Child trafficking with help of State’

By Esther Wemmers
Amsterdam – A victim of the major illegal adoption affair of the eighties wants to sue the Dutch State for co-responsibility of child trafficking and allowing couples to change the identity of their illegally adopted children.

Childless Dutch couples avoided the long waiting lists for adoption by feigning pregnancy and flying to Brazil with a pillow under their dress. There they were handed over a baby by some intermediaries, the couples then registered the baby with false documents as their biological child. That is how many dozens of Brazilian children illegally entered our country over a short period of time during the eighties.

Because official documents and waivers were lacking, it is for many of these children almost impossible to trace their roots. “I finally succeeded in finding my original mother. That took me more than ten years and 120’000 Euro ”, says Patrick Noordoven (34), who wants to start a court case with support of law firm Prakken d’Oliveira to get compensation for the material and immaterial damage derived from the illegal adoption.

“Dutch intermediaries acted as false witnesses. It is also known that Dutch civil servants in diplomatic service were involved in the illegal practices”, says Noordoven. A Dutch lawyer drafted dozens of fraudulent documents, on instruction from the embassy and the consulate. Almost nobody was prosecuted.

“How can it be that all those people who assisted in the illegal adoption practices could get away with it unpunished? I want to get an answer to this question among others through a juridical procedure. I wish that nobody else will have to experience what has happened to me. I myself got almost no information and help and nobody took my right to my identity seriously.”

Lawyer Brechtje Vossenberg of Prakken d’Oliveira confirms that she is currently examining if there is/was a wrongful act that can be attributed to the State. “The State is obliged to guarantee the right to identity of its citizens, as well as the right that everybody has to know where (s)he comes from.”

Tomorrow a report on the illegal adoption affair.

Photo: Patrick Noordoven watches as DNA is taken with one of his sisters. “I finally succeeded in finding my real mother. That took me more than ten years and 120’000 Euro though” In the newspaper of 5 March 1983 (see box) the illegal adoption affair was mentioned. 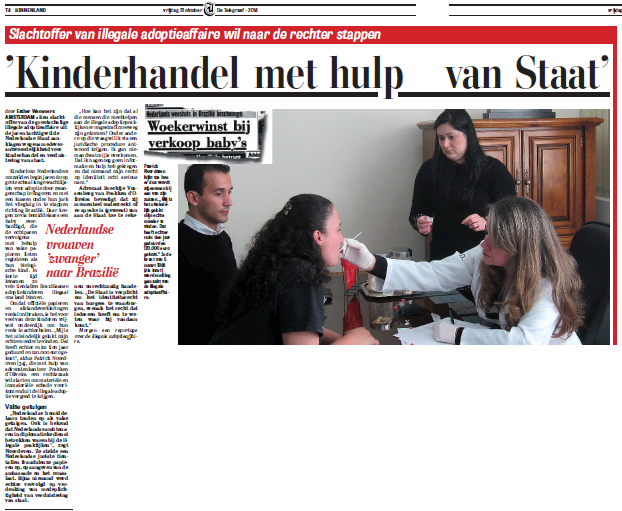